Every late spring a shady corner of the hayfield is bright blue with the flowers of a pretty weed.  The area is about 5 feet square and has not increased noticeably in size over the years.  Having learned my lesson from the yellow rattle about allowing pretty weeds in the hayfield, I decided to research this lovely blue flower.  Turns out it is Germander speedwell, Veronica chamaedrys, a member of the Plantain family. 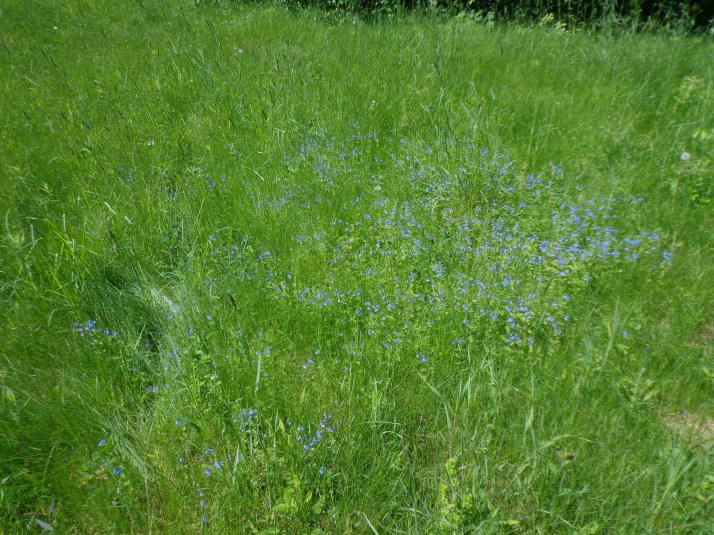 Germander speedwell was introduced to New England and is native to Britain and Europe.  A perennial herb with rhizomes, it is termed a turf weed due to its tenacious ability to survive with grass.  The name Germander has nothing to do with Germany.  It is a corruption of the pronunciation of chamaedrys.  The herb has a long association with healing and was well known and widely used over 500 years ago.  The high tannin content of the leaves and stems makes an astringent tea that was favored for respiratory tract and nervous system ailments and as a treatment for stomach ulcers.  It was also used as a poultice on the skin, especially for itching. 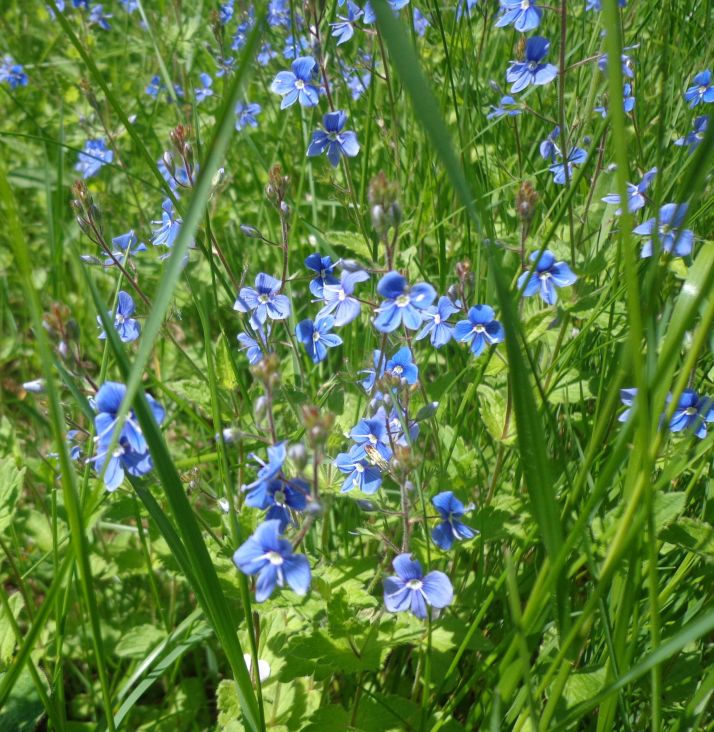 The flowers are large for a turf weed, measuring a half-inch across.  Each flower lasts only one day and wilts quickly on picking.  This trait earned the plant the sobriquet Mannertreu or Men’s Faithfulness in Germany.  Apparently German men had a reputation for short-lived faithfulness.  During extended rainy spells, the flowers do not open.  They are able to self-pollinate.  In France the plant was often used as a substitute for Asian tea, due to a similar smell and flavor, and went by the name Europe Tea.  The seeds are said to be favored by birds.

Because this weed can out-compete grass, I will be keeping a close eye on it.  Should the size of the patch increase, I will mercilessly eradicate the little speedwell.  So far the plant has restricted itself to one shady spot under an ancient maple and causes no problem in the field.

Winterberry (Ilex verticillata) grows throughout the eastern United States.  A member of the holly family, winterberry is a deciduous shrub growing as tall as ten to fifteen feet, preferring moist soil and full sun.  This holly has somewhat glossy leaves that do not have the sharp, thorny edges of most hollies.  Like other holly, winterberry has male or female plants.  The bush has multitudes of tiny white flowers in the spring and becomes covered with bunches of bright red berries tightly packed along the branches in the fall.  Because they shed their leaves, the berries on the bare branches with a snowy background are particularly eye-catching.  Berry laden branches make lovely decorations added to fresh floral arrangements for Thanksgiving and Christmas.

As a child growing up on the farm, I never saw what we called red-berry bushes on the property.  Often in the early winter these bushes could be spotted along roadsides where they favored damp ditches. After my husband and I bought the farm in 1985, I decided to decorate for Christmas outside the front door of our new home with a pretty wintery display.  I collected an armload of winterberry branches from roadside ditches in the area.  I made a large arrangement of winterberry mixed with pine and balsam boughs and pine cones.  It was very beautiful for a few days.  Then the red berries began to disappear. Before long the holly was stripped, leaving sad bare branches protruding from the evergreen boughs.  Although I never saw them, I assume the wild birds ate all my holly berries.  The lesson was:  don’t use winterberries for outdoor decorating.

Then a few years after the destruction of my Christmas bouquet, I was walking in a swampy area of the horse pasture in the early winter and found a small bush with a few red berries on it.  A winterberry shrub had volunteered on the farm.  As time went by, more winterberries appeared until now there are several dozen.  Most grow in that damp area of the pasture.  The spot is the first real woods near the house and would be a natural place for a songbird to rest after filling itself stripping berries off my holiday decorations.  The berry seeds were probably excreted by the birds as they rested.

Now, more than twenty-five years after the birds stripped my holly berries, I am finding young winterberry bushes growing along the edges of the hayfield, far from the house.  This is exciting for me because I love the beautiful red-berry bushes.  Unfortunately, most years the berries do not last long enough on the branches for me to pick any for decorating.  This year, as usual, the birds have eaten nearly every berry.  Branches that were thickly loaded in early fall are now almost bare.  The birds must be very hungry, or else winterberry is one of their favorite foods.  The photos I’ve included show some of the best remaining branches with their meager offering of berries.  They will soon be stripped clean.  I am hoping that as time passes, more and more winterberry plants will grow until there are enough for the birds to get their fill and for me to have a few for Yuletime decor.

This time of year the wild asters are in full bloom. Their pink or purple flower masses line the roadsides, field and forest edges and any other place that is open and unmown. Asters can grow very tall, up to 4 feet or more, before blooming. They need all summer to reach their full height. Other asters stay small, begin blooming early in the summer and hold their flowers until the frosts.

There are many varieties of wild asters in Maine. They are actually classified as Astereae, being New World and not Eurasian asters. Still, their beautiful star-like flower shapes all appear very similar. Some have white petals with yellow centers that bloom for several weeks or more. As the flowers age, the petals take on a purplish or even reddish hue. 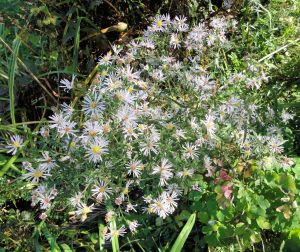 Bees and butterflies love asters. I allow many varieties of wildflowers including asters to grow around the property so the wild birds and insects have a natural food source.

The beauty of wild flowers is often delicate and understated, not the brash pageantry of garden varieties.  These wild cousins of our domestic flowers will always find a spot in my plantings.